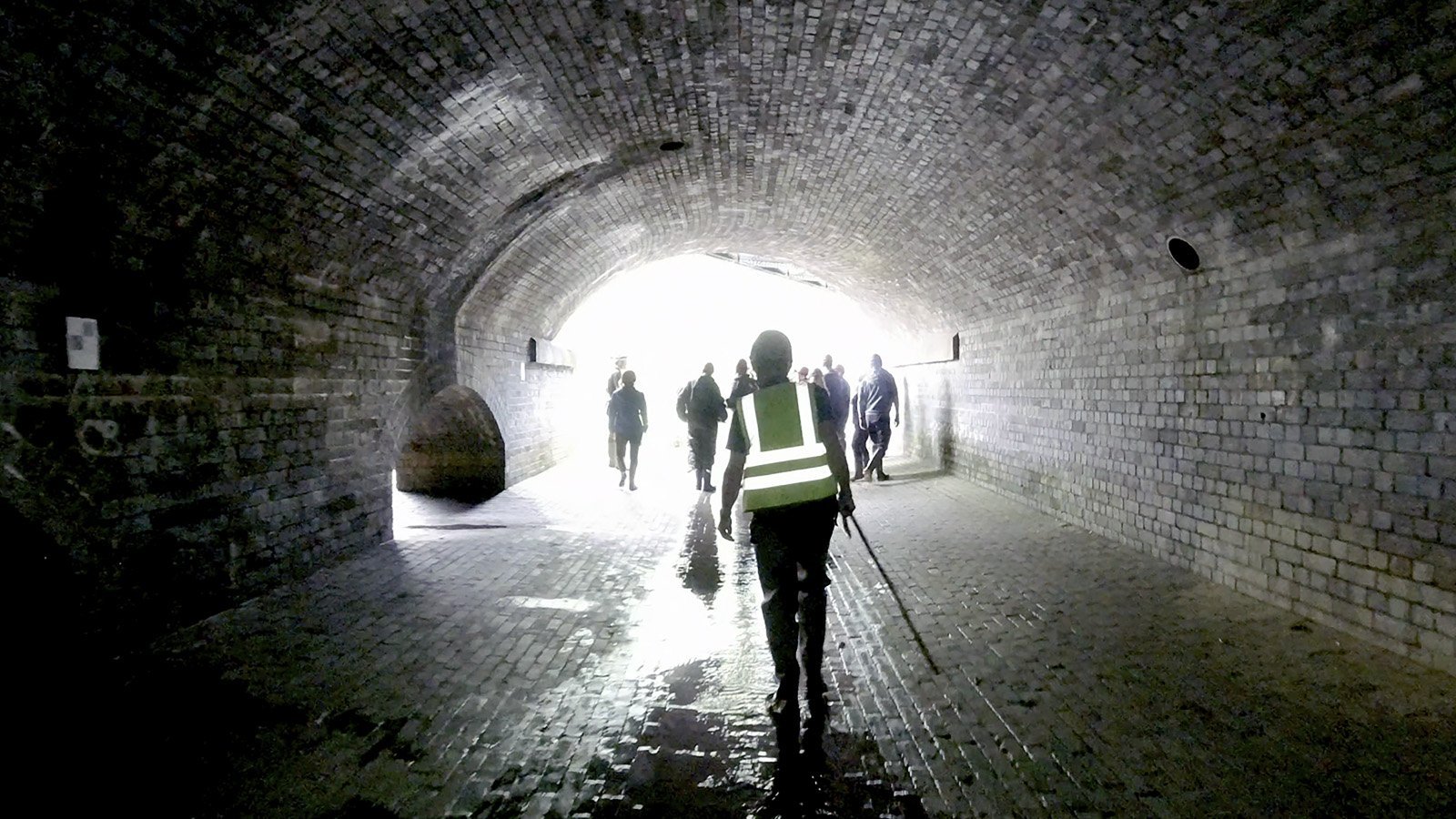 If you’ve ever stood on the platforms of Sheffield train station, you probably didn’t realise that the river Sheaf is flowing just meters beneath your feet! These hidden rivers are part of a network of secret tunnels running below Sheffield City Centre. Tunnels that lead to the infamous cave-like Megatron storm drain culvert system.

The Sheffield Guide went on an urban exploration journey beneath Sheffield…

Tour Secret Tunnels beneath Sheffield to The Megatron

The Sheaf and Porter Rivers Trust formed to try and preserve and uncover hidden rivers in and around Sheffield. An example is the Porter Brook Pocket Park. Here, the river runs alongside a little city centre park; somewhere you can go to enjoy lunch or have a nice relaxing sit right next to the river.

Attracting wildlife back into the city is an important aim too. With open rivers come more diverse fish and wildlife. Water flowing and plants being able to grow in the open attracts various bugs, birds and other animals that have previously been lost due to urban spread. Reintroducing this biodiversity helps with health, mental wellbeing, economy, tourism and many other important factors.

Additionally, the trust have been conducting tours of river culverts underneath Sheffield. The ‘urban caving’ walks in these ‘secret tunnels’ follow a large portion of the city centre. Visitors can discover what there is to offer from these lost and hidden rivers — and what exists beneath Sheffield.

History of secret tunnels and hidden rivers beneath Sheffield

There is a lot of history to discover from the culverts and storm drains of Sheffield.

Along the rivers you can find remains of old Crucibles — used in steel-making — that had been discarded into the river.

A cheap snack for working classes in Victorian times would have been oysters. This fact is visible due to the plentiful of oyster shells to be found along the river journey.

There is also other industrial and architectural history. Abandoned artefacts, such as bricks from Sheffield’s Gregory Brick Company amongst others, give a glimpse of the city’s heritage. Meanwhile, the tunnels themselves are an insight into incredible Victorian architecture.

At the Megatron, Chair of Sheffield’s Waterways Strategy Group Simon Ogden tells us about future plans for Sheffield’s culverts.

Ambitions include creating the ‘Sheaf Field’ park and removing part of the deteriorated culvert. This would open out the river Sheaf by the ruins of Sheffield’s old castle at the old Castle Market site. Stakeholders are exploring the possibility of having water sports such as kayaking on a stretch of the river here.

There are also plans to open up light wells where access points are currently situated. As a result, fish — including salmon — would be able to move upstream and into the city centre.

Hidden rivers and secret tunnels route to The Megatron

On our tour we go from Porter Brook Pocket Park past BBC Radio Sheffield and under South Yorkshire Archives/Red Tape Studios. For this section of the journey we’re following the Porter Brook.

Tunnels get smaller as we go under Site Gallery/The Showroom/Workstation. Continuing under Shoreham Street/Sheaf Street we then emerge by the Station Q-Park for a short distance in the open.

Under Cross Turner Street we head underneath Sheffield Train Station to the amazing Victorian tunnel network. The Porter meets the river Sheaf directly under Platform 5A.

We then work our way through the culvert tunnels to an opening near Ponds Forge International Sports Centre. Here, KLF founder Bill Drummond reportedly wrote the quotation on the wall: “Is the river really beautiful or is it just the gradient of the land”.

Inside The Megatron Storm Drain beneath Sheffield

Beyond that we go back under Sheaf Street, heading beneath Ponds Forge and Commercial Street. It is now only a short distance to the Megatron. The tunnels begin opening up as we enter the Megatron below Blonk Street West.

The Megatron has been compared to a huge urban cave and even a cathedral. It is easy to see why; the vast space is awe-inspiring. A curved roof has no upright supports and the width is expansive.

An integral part of the City Centre’s flood defenses, the Megatron is a storm drain. The river Sheaf normally streams through the centre, eventually meeting the River Don by the junction of Castlegate and Blonk Street.

During major storms and flooding, the space can fill up drastically with water from the two rivers, easing pressure on other areas.

Bats now roost in the ceiling of the Megatron, which limited our ability to shine lights to photograph or video inside. Anyone looking to visit the cavern is asked to respect the wildlife there. Even normal speaking voices can scare the bats and other wildlife in this area when amplified in the tunnels and caverns.

Should you wish to explore these secret tunnels below Sheffield it is recommended to book onto one of the tours when available. As well as ensuring safety, the guides are very informative and will point out lots you might normally miss.

Much of the walk is in pitch-dark tunnels with no lighting other than any torches you bring. To add to the danger you’re mostly wading through running rivers — and ground is very uneven underfoot.

As you can see in the video above, tunnels can get very tight and claustrophobic. If you are tall, have mobility issues or any kind of breathing problems it wouldn’t be advisable to chance the route.

In places there is no phone signal or easy access so calling emergency services to find and assist with any problems could be a real issue. Of course you’re dealing with live rivers too. Water levels can quickly rise — so going with an expert who knows about such situations is advisable.

Remember, weather can be perfectly fine in Sheffield, but rainfall can be high upstream, affecting the rivers for long distances.

Exclusive video exploring secret tunnels under Sheffield to The Megatron

Stay safe and explore the rivers from the comfort of your own home with our exclusive video.

Watch at the top of the page, or head to The Sheffield Guide YouTube for the full video. Remember to subscribe to the channel for more special guides to Sheffield.