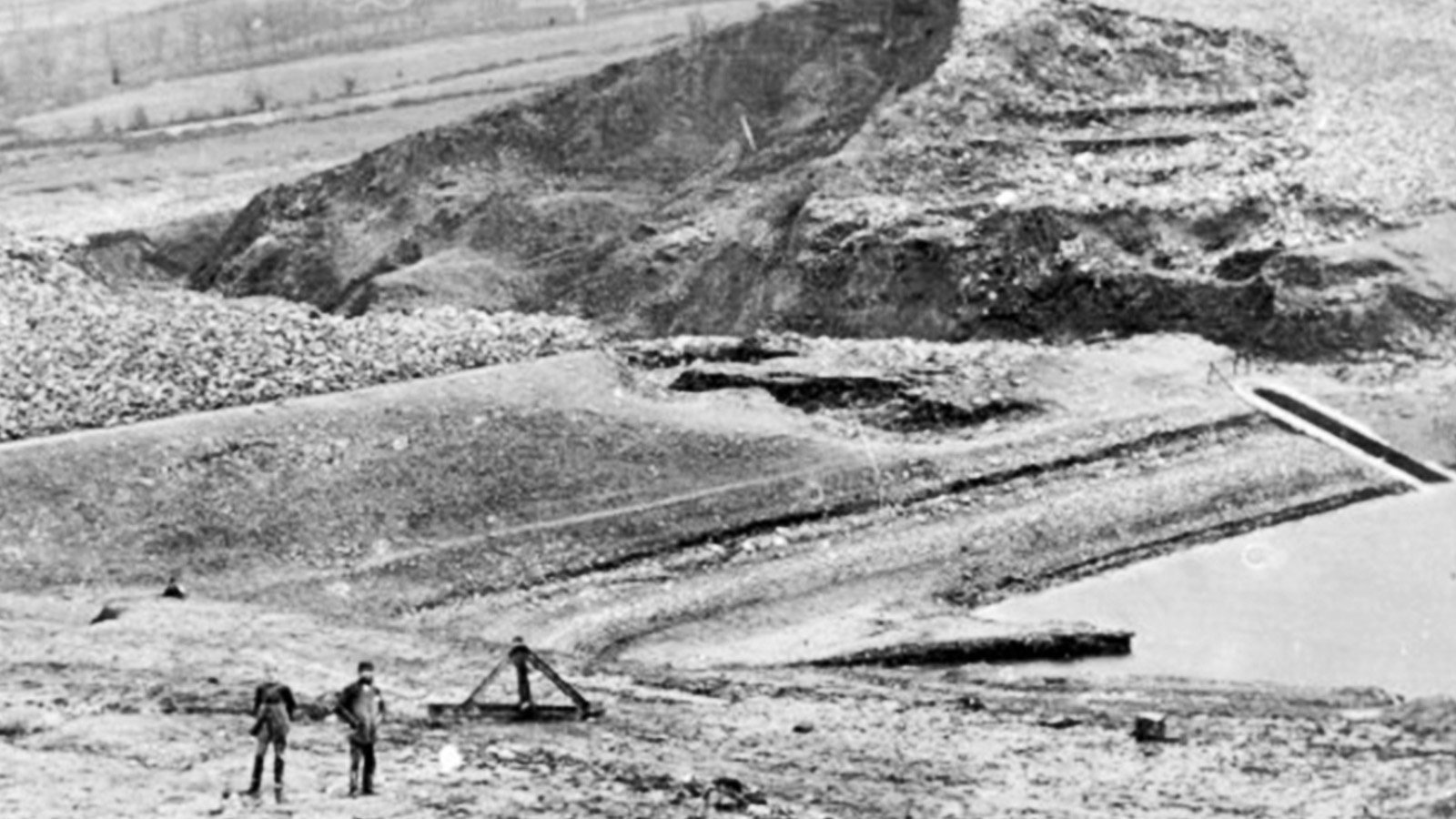 The Sheffield Guide takes a comprehensive look back at devastating accounts of the Great Sheffield Flood.

A number of floods have hit the country in recent years. Notably, in 2007 over 23,000 homes and more than 3,500 businesses were flooded across Yorkshire — Sheffield being hit particularly hard.

As horrible as those events were, recent floods don’t compare with the devastation of the Great Sheffield Flood.

On Friday 11 March 1864 construction was almost complete on the new Dale Dyke Dam high up the Loxley Valley. Proud engineers had begun filling the reservoir for the first time.

Sheffield Waterworks Company had started building the dam five years earlier. Dale Dyke Dam was conceived to provide drinking water for the expanding village of Bradfield. Similarly, the reservoir would also provide a running water supply to many local mills.

Engineer William Horsfield had taken shelter by the dam during a storm on that fateful day. He happened to cast his eye across the retaining wall of the dam and noticed a crack had developed.

Horsfield inspected the fracture and noted it was only wide enough to slot a penknife into. He estimated the crack to run across the embankment for around 50 yards.

The worker didn’t believe the gap to be particularly dangerous, but did see fit to report it.

Sheffield Waterworks Company immediately dispatched staff from surrounding areas to inspect the crack. However, it proved difficult for them to properly investigate as darkness had fallen.

The group noted that the gap had now widened a little, to about a finger’s width. Still, danger was not anticipated.

Valves were opened in order to slightly relieve the pressure on that part of the dam. But with no major risk anticipated many of the initial workers left the site around 10pm.

The inevitability of flooding dawns

Gunson and the remaining workers observed that the crack had now grown to the width of a man’s hand. Realisation dawned. One of the team remarked “if we don’t relieve the dam of water there will be a blow up in a half an hour.”

“If we don’t relieve the dam of water there will be a blow up in a half an hour.” – Engineer inspecting the cracked dam

Gunpowder was set down in an attempt to blow a weir and escape the water. However, the explosion didn’t happen despite attempts to light the fuse. It is thought that either the gunpowder had become wet, or the train of gunpowder wasn’t applied correctly in the darkness.

Chief engineer John Gunson again inspected the area. As he looked up he saw the first signs of water flowing over the embankment and down the crack.

The embankment widened to around thirty feet in the minutes that followed. Disaster had become an inevitability.

An avalanche of water

Workers from the earlier party had told friends about the crack on the way home. However, once the dam had given way no warning could be carried fast enough down the valley.

“Not even a Derby horse could have carried the warning in time to have saved the people down the valley.” – Government inspector later investigating the cause of the Sheffield floods

The only warning for many downstream was the terrific noise of the water itself rushing down the hillsides.

Luckily, farmer John Hempstall, his family and their lodger were successfully warned. Their homestead at Annett House was the first human abode in the path of the rushing water.

A labourer for the Waterworks Company had run down the hill just before midnight shouting “It’s coming! It’s coming!”

The family — being awoken from slumber — didn’t even have time to put on clothes to make their escape.

Watching from a hillside they saw the house and all its outbuildings swept away moments later. The torrent so destructive that afterwards no-one could even tell buildings were ever located there in the first place.

The Sheffield flood continued through Lower Bradfield. Witnesses reported a wall of water many yards high flowing down the valley.

Buildings were swept down, bridges were completely destroyed, trees were uprooted and stone boulders were easily carried away.

Tragically, the first victim of the Great Sheffield Flood was an infant just one day old. The baby was swept from the hands of his parents as they tried to evade the rushing water.

Ironically, The father had been present during early inspections of the crack. In the end he managed to save his wife but not his son.

The child’s body was found three days later in a downstream coal cellar.

Houses swept away at Malin Bridge

The huge body of water quickly made its way through the narrow sweeping valleys, its volume increased by sweeping up the contents of several other dams on its journey.

Much of the worst devastation took place at Malin Bridge. Along just a few hundred yards, more than 20 houses and their occupants were completely consumed.

102 lives were lost in this small area alone.

Huge grinding wheels and their mills were destroyed.

Quagmires of muddy fields replaced land where houses once stood. The huge body of water picked up many items along its journey, simply discarding them randomly across whole areas downstream.

Human and animal bodies scattered the path of the flooding. Some were found as far away as Doncaster — some 27 miles away from the originating reservoir.

Witnesses stated the water “came all at once and went all at once but in between continued at its peak for about a quarter of an hour.”

Unabated, the water made its way through Hillsborough.

A row of newly built three-storey houses were almost completely submerged. Water reached the tops of their bedroom ceilings, marking some eighteen feet above the roadway outside.

Uprooted from its foundations, an entire brick house — complete with all its walls, roof and flooring — was swept away. It only stopped at Hillsborough’s strong bridge where witnesses recalled it stood for a few hours before eventually collapsing.

The valley route of Sheffield’s rivers was home to much of the city’s industrial infrastructure.

Larger factories were built sufficiently to withstand much of the destruction. However, most Smaller businesses and workshops were devastated.

Workers preparing a night shift break meal inadvertently set fire to one Kelham Island factory after hearing the rush of the approaching water. Consequently they panicked and climbed up the rafters, worrying they would now burn to death.

Floods burst in and extinguished the flames just in the nick of time.

The whole neighbourhood around Nursery Street was almost completely submerged. Waters stopped just short of taking the nearby railway line.

Lady’s Bridge to Rotherham and Doncaster

Continuing along the river path, the wave destroyed many of the riverside buildings. Debris almost completely blocked the arch of Lady’s Bridge.

The Great Sheffield Flood drove its way past The Wicker and through Brightside. Many buildings in Attercliffe were damaged, most having around 4-feet of water deposited within.

Unbelievably, the flooding continued across South Yorkshire to Rotherham and Doncaster. It had lost much of the ferocity seen earlier on, but low-land buildings saw a couple of feet of ingress.

It was only by the daylight of the next morning that the destruction could be properly appreciated.

Debris lined the muddy path of the Sheffield Flood. Dead bodies of livestock and humans littered the route.

One inhabitant of a hillside cottage slept through the whole ordeal. When he awoke the next morning he gazed across the valley in disbelief. Everything that had previously stood below his property was completely gone.

A big clean up

Work to clean up the horrific destruction started immediately.

Scores of bodies were recovered, many had been mutilated along their journeys. One was recovered from the branches of a large tree.

Cellars of Public Houses became temporary mortuaries. Bodies would be moved in batches to Sheffield Workhouse where attempts were made to identify the victims.

Remains were still being found as much as two months later.

More than 260 lives were claimed in total, with some bodies never being recovered.

Dale Dyke Dam was eventually completed — on a much smaller scale — in 1875.

John Gunson shouldered most of the blame for the tragedy, however Sheffield Waterworks Company stood by him. He passed away in 1886.

Courts criticised large elements of the design and construction of the dam. Inspectors raised multiple concerns including the thickness of walls, the placement of outlets and the use of various materials.

Ultimately, the disaster led to engineering reforms for subsequent projects.

Meanwhile, an arbitration board was set up to handle compensation claims against the Waterworks Company.

The 150th Anniversary and subsequent remembrance

Guided walks were arranged along part of the flood route. Sheffield City Council also laid a wreath at a memorial built by the river in the Millsands development. Church services took place in affected areas and primary school children in the city were taught about the Great Sheffield Floods.

Since then, memorial events occur annually and many tributes to the tragedy have been erected.