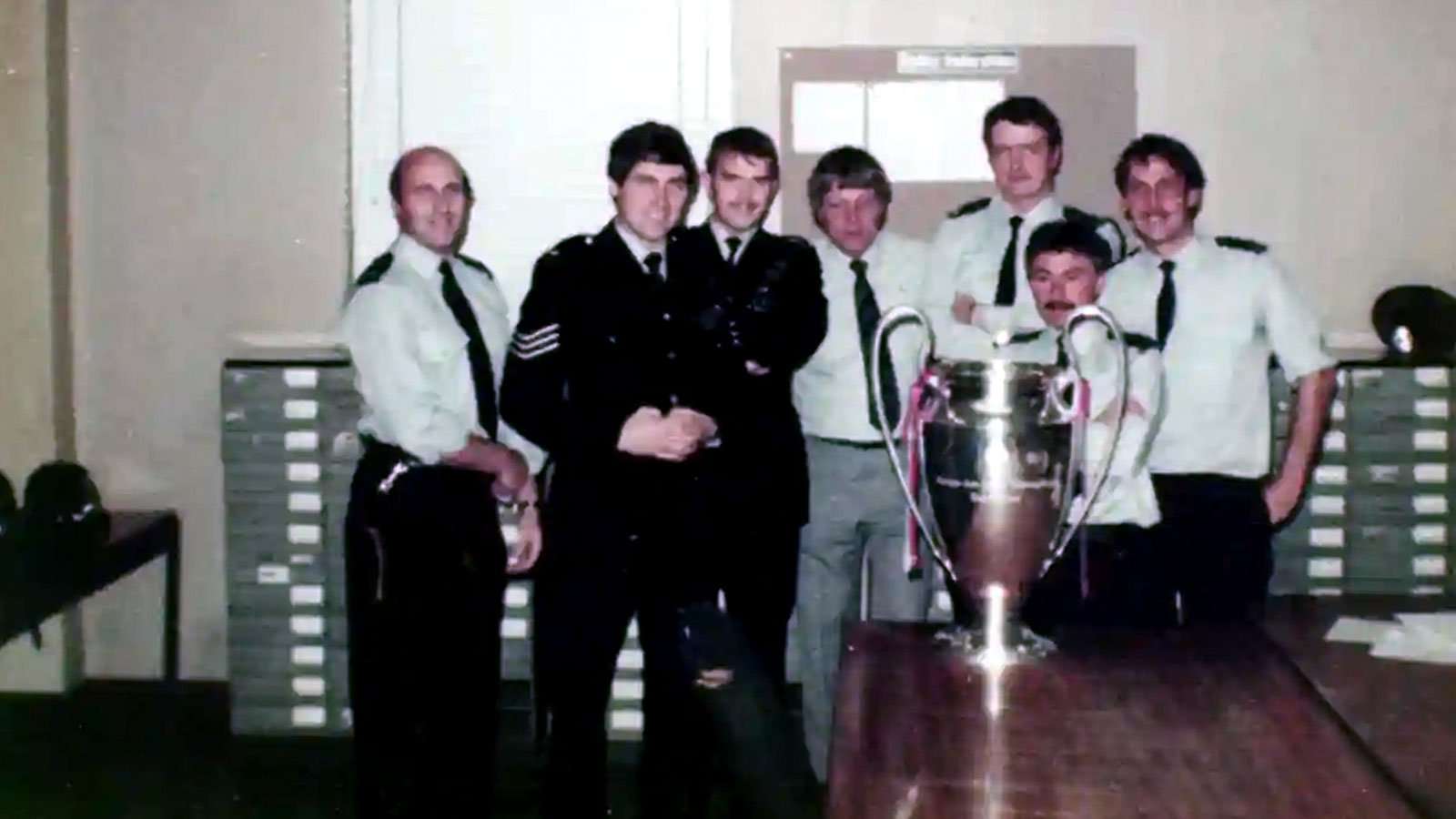 In 1982 the European Cup was stolen in Birmingham. It later turned up at a Sheffield police station. The event remained a secret for nearly 30 years, but we now have the full story…

“Sarge, we’ve got a man at the front desk who says he’s got the European Cup in his car.”

It was gone 2am on a fairly quiet weekday in 1982. A man had walked into Sheffield’s West Bar police station claiming to have the real European Cup in the boot of his car.

At first the bobbies thought it was a crank. The giant cup was the most prized trophy in European football. Why would it be in some fella’s car boot in Sheffield?

Aston Villa players Colin Gibson and Gordon Cowans — part of the 1982 European Cup winning team — had taken the trophy into the Fox Inn, located in Hopwas near Birmingham.

“We used to go out and take the European Cup where we could to show it to the fans and let them have their pictures taken with it.

“Gordon and I had had a few drinks, and we were playing a competitive darts match, when someone turned round and said ‘the cup’s gone, it’s been stolen’.”Colin Gibson, Former Aston Villa Defender (Speaking to BBC Radio)

The story goes that as the cup was passed around from table-to-table for people to hold and folk to have their photos taken (cameras weren’t as ubiquitous back then so many people had rushed home to get their cameras for the opportunity).

Then one regular punter, Adrian Reed, took it outside to “take a quick picture with his car”. He didn’t return.

“I didn’t know Adrian that well, but he lived locally.

“We obviously banned him after that, but I had never had any problems with him before. He was not the kind of customer that I kept an eye on.”John Bayliss, Former Landlord of the Fox Inn, Hopwas (Speaking to the Birmingham Mail)

From the pub Adrian Reed first took the cup home, as recalled by his former flatmate Roger Grey:

“My recollection is that Adrian turned up one night holding the European Cup.

“They had had a few drinks, and unfortunately the European Cup fell down the stairs, and incurred a few dints and a twisted handle.

“It’s very big and very heavy and I guess after a few drinks people perhaps weren’t as careful with it as they should have been.

Full details of how the cup ended up in Sheffield are a bit sketchy.

Reed’s former flatmate Roger Grey vaguely recalls he and his friends persuading the “lovable rogue” to hand it in to police.

It is thought that Reed headed to Sheffield as that is where he studied at University.

As the record stands, someone calling themselves ‘Eric Sykes’ walked into West Bar police station and proclaimed he had the European Cup in his car boot.

“I remember the lad on the desk walked through to the control room and said we’ve got a man at the front desk who says he’s got the European Cup in the car.

“So off he trotted and next thing the swing doors go and there he is at the front desk with the European Cup, with claret and blue ribbons on.”Mick Greenough, South Yorkshire Police Officer

An alternative to the earlier ‘pub photo’ story, Peter Darling — a Duty Sergeant on the night — recalls that ‘Eric Sykes’ took exception to the player’s bad language in the pub so felt the need to swipe the trophy when nobody was looking to teach them a lesson.

“I don’t know what possessed him to do it; I don’t think he knew himself, really.

“But at some point he started to realise that he’d be the most wanted man in Europe.

“He’d been a student in Sheffield and, for whatever reason, he drove up here, with the cup in his boot, to hand it in.”Peter Darling, South Yorkshire Police Officer (Speaking to The Guardian)

Officers in Sheffield made efforts to contact their counterparts in Birmingham.

Their first phone call was hung up on, with the answering Brummy officer declaring they couldn’t talk right now as they were in the middle of a “major incident”.

“So we rang back, and said ‘we think we know what your major incident is’.

“We said ‘we’ve got the European Cup here, would that be connected to it?’“Graham Wragg, South Yorkshire Police Officer

Whilst waiting for West Midlands Police to come and collect the trophy, South Yorkshire’s finest couldn’t resist an opportunity.

“We decided that we might as well hold a football match for the cup.

“We picked two teams of four and away we went! In the middle of the night. In full uniform.” Graham Wragg, South Yorkshire Police Officer

Additionally, the officers on duty called in their Scenes of Crime Officer, as he had access to a camera to record the event.

One of the faces photographed with the giant cup was former Sheffield Wednesday goalkeeper Peter Springett, who became a police officer after retiring from the game.

Unfortunately no-one can remember if Springett was one of the officers who took part in the impromptu game of football.

The secret of the stolen European Cup

The story remained a guarded secret for nearly 30 years, only coming to public light in 2010 when West Bar police station was being cleared out for closing down.

Photographs from the night were found and brought out at a farewell event for the station.

No charges were ever brought against ‘Eric Sykes’ — or Adrian Reed — for the theft. Everyone apparently agreed to keep the evening’s events a secret.

Sadly, it is thought Adrian Reed died in a car crash some years ago.

“He was a loveable rogue, he would do anything for his friends, a really nice bloke. He was so charming he could talk the hind legs off a donkey.”Roger Grey, Adrian Reed’s Former Flatmate (Speaking to BBC Radio)