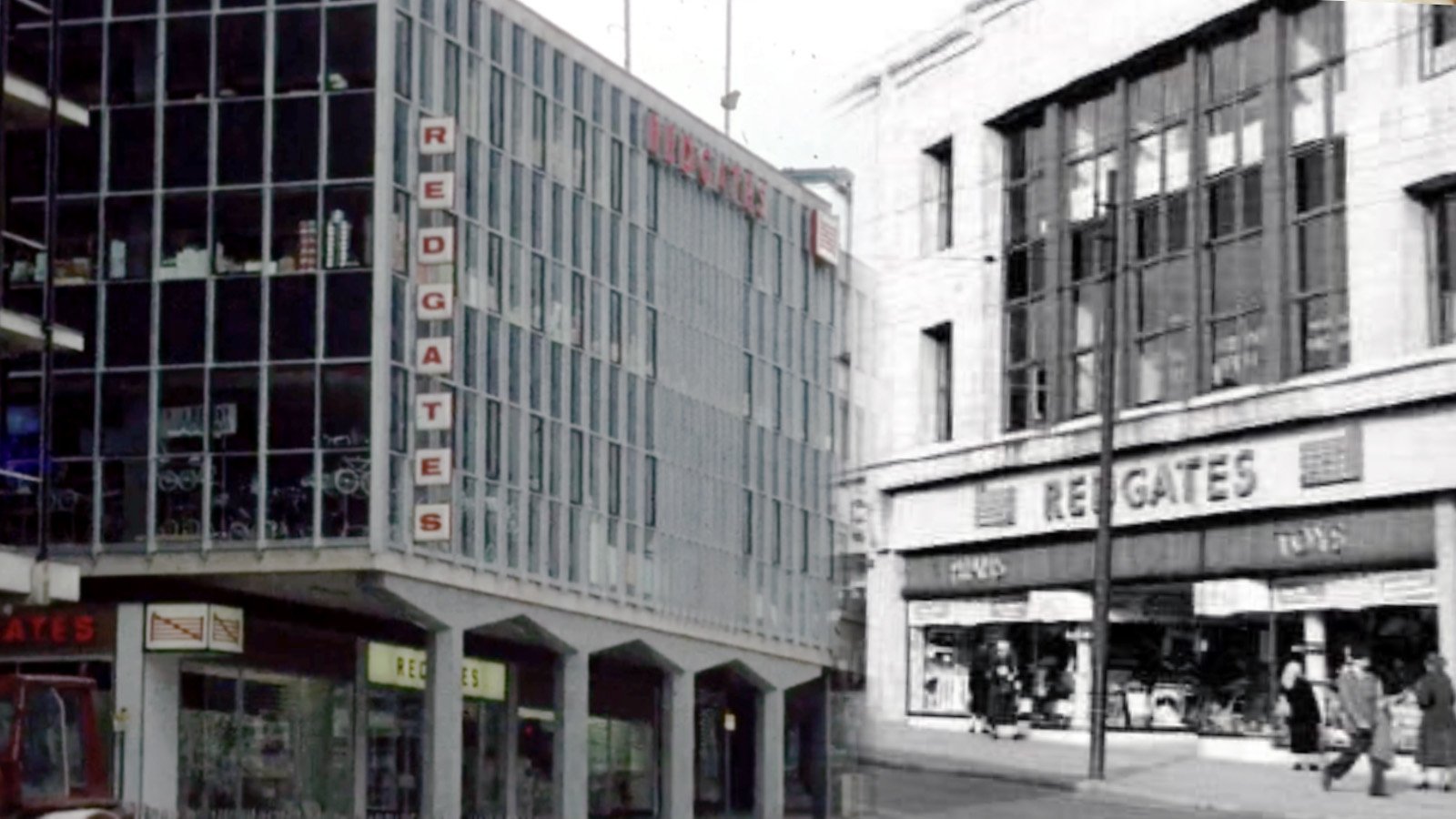 Before soul-less, cavernous warehouses of Toys-R-Us killed the mystique of the toy emporium, Sheffield had Redgates: the toy shop of all toy shops. The Sheffield Guide compiles a definitive history…

Edwin Redgate was originally a watchmaker trading from premises in Angel Street in 1864. Before his name became synonymous with selling toys he moved around several different locations as a manufacturer and merchant of various items.

The watch shop was moved from Angel Street to Church Street in 1870. By 1876 Redgate had pivoted to making sewing machines.

Records then show ‘The Redgate Company’ moved to Haymarket by 1887, becoming a perambulator (pram) manufacturer and selling fur products.

A move to Fargate: beginning of a toy empire

In 1893, Edwin moved the shop to a prime location on Fargate, still selling prams and furs. In order to sell a cheap batch of furs he had bought, Redgate cut them in to pram covers. The business then seemed to naturally gravitate to products for young children.

A logical evolution was to manufacture and sell wheeled toys to sell alongside the prams and accessories. Subsequently, toys started to become the core product of the business.

In 1895 Redgate’s daughter Annie married William S Nunn, who joined the business. Nunn would travel to toy fairs and vastly expand the toy selection at the store.

Edwin Redgate passed away in 1909, aged 69. The Redgates Company stayed with the Nunn family thereafter.

On to The Moor

Constantly increasing the portfolio meant E Redgate outgrew their Fargate shop. The Moor was seen as a more prestigious retail location and it was decided to make the move.

Redgates Toy Shop opened at Moorhead in 1925 and continued to grow in popularity. Disaster stuck 15 years later though, with the shop being razed during the 1940 Sheffield Blitz.

After the bombing, Redgates moved to temporary premises on Ecclesall Road before eventually moving back to The Moor in 1954. However, most nowadays will probably remember its huge Furnival Gate premises (later Sunwin House) which was opened in 1962.

It is difficult to overstate the magic of Redgates Toy Shop. The huge store spanned several floors and contained all our favourite toys, as far as the eye could see in every direction.

Whether you were shopping for dolls, little cars, action figures, Lego, Subbuteo, models, board games or the latest fad — Redgates Toy Shop had it all.

Children were encouraged to play with the merchandise making it as much a playground as it was a shop. Celebrities would often attend for meet-and-greets, whilst you’d often see staff dressed as the latest action figure characters.

All Sheffielders of a certain age have an abiding fondness of the magical toy superstore.

The best toy shop outside London

Redgates was widely regarded as the best toy shop outside of the capital.

Indeed, Hamleys of London saw the popularity of Redgates Toy Shop and opened up a Sheffield store nearby on The Moor. But, the strangers couldn’t match the charm and excitement of the city stalwart and closed not long after opening.

A family affair of 129 years

52 different members of the Nunn family were shareholders, and a number of them worked in the store.

The infamous shop remained family owned-and-run all the way through to 1986. However, after 129 years a decision was made to finally sell-up to UK chain Zodiac Toys.

Even the large chain couldn’t bear to forfeit generations of local goodwill, so the store was rebranded ‘Zodiac at Redgates’.

Unfortunately the legendary store was forced to closed its doors just 2-years later, in 1988. Nationally, Zodiac had struggled to compete with new behemoth out-of-town retailers that were cropping up across the country.

The building became a Co-Operative Sunwin Department Store in 1990, eventually closing in 2005. TK Maxx used the site as a temporary location in 2008 whilst its Orchard Square stores were refurbished.

Having spent its remaining years empty, the building was demolished in 2018 to make way for a new retail development.

A newly built H&M store now occupies the site. Look closer though and you’ll see an homage to Redgates in the form of a plaque on the wall where the legendary toy shop once stood.

Redgates may be gone, but its memories live on in every now-grown-up (in body, but never in mind) excited child that ever entered its wondrous doors.

What are your memories of Redgates Toy Shop? Share in the comments below.