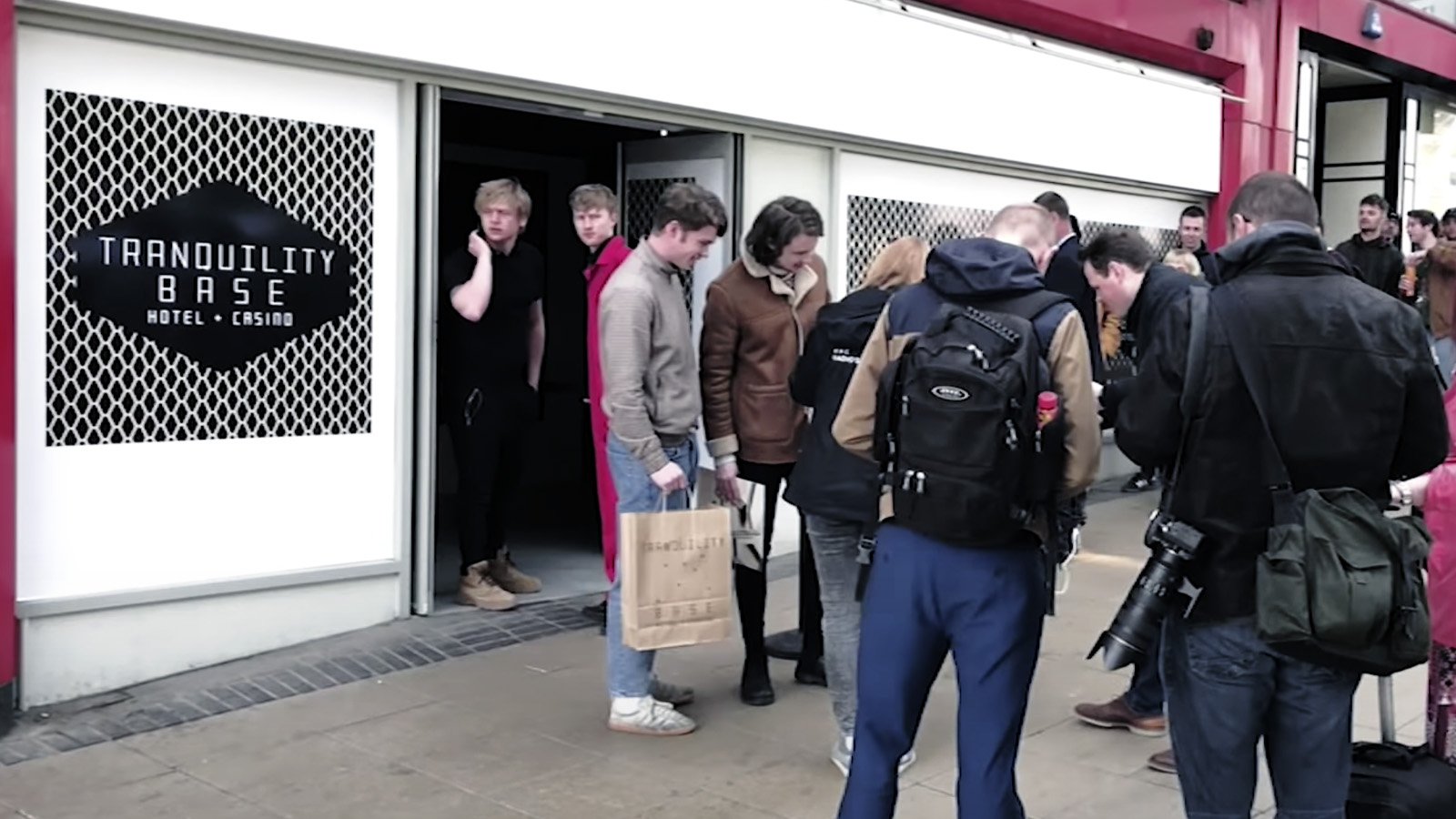 2018 saw the release of Arctic Monkeys album Tranquility Base Hotel & Casino. As part of the promotion for the release, the band opened temporary ‘Pop-Up Shops’ around the world. The Sheffield Guide took a look inside the Steel City store.

On 5 April 2018 a short Ben Chappell video signalled the announcement of a new, eagerly awaited, Arctic Monkeys album. The video showcased a model of the album artwork (created by Alex Turner) and was interspersed with samples of songs from the album.

To coincide with the release, the band organised for several pop-up shops to open around the world, selling exclusive merchandise and special copies of the record. Arctic Monkeys’ home town of Sheffield was picked as one of the six locations for the special stores.

The first thing to greet you on arrival at the temporary shops was a huge line to get in. From the Barkers Pool unit, queues snaked around the corner down Burgess Street past The Yorkshireman Rock Bar.

Things moved relatively fast though and before long eager fans would make their way to the doorway of the exclusive store.

However, the queue outside just led to… a queue inside! This time though, you were in a gallery of sorts. Pictures had been hung of the band and various aspects of the album artwork. At least you had something to cast your eye over whilst waiting.

A second section of the inside queue featured a projection of the short film ‘Warp Speed Chic’. The movie, also directed by Ben Chappell, documented the making of Tranquility Base Hotel & Casino.

Inside the Pop-Up Shop

Breaking through the semi-darkness of the exhibition spaces, visitors broke into the light of the Arctic Monkeys pop-up shop itself.

Racks were full of vinyl copies of the album — including a very special gold edition vinyl only available in Sheffield. Manned by boiler-suit wearing (a motif of the album’s music videos) staff, tables around the edge of the space contained lots of limited edition merchandise.

Available to buy in the special Arctic Monkeys Pop-Up Shops:

Shoppers were given a branded paper bag for their purchases, along with special Tranquility Base Hotel & Casino postcards.

With rumours of another album on the way sometime soon, will Arctic Monkeys re-open their pop-up shops around the world once again?