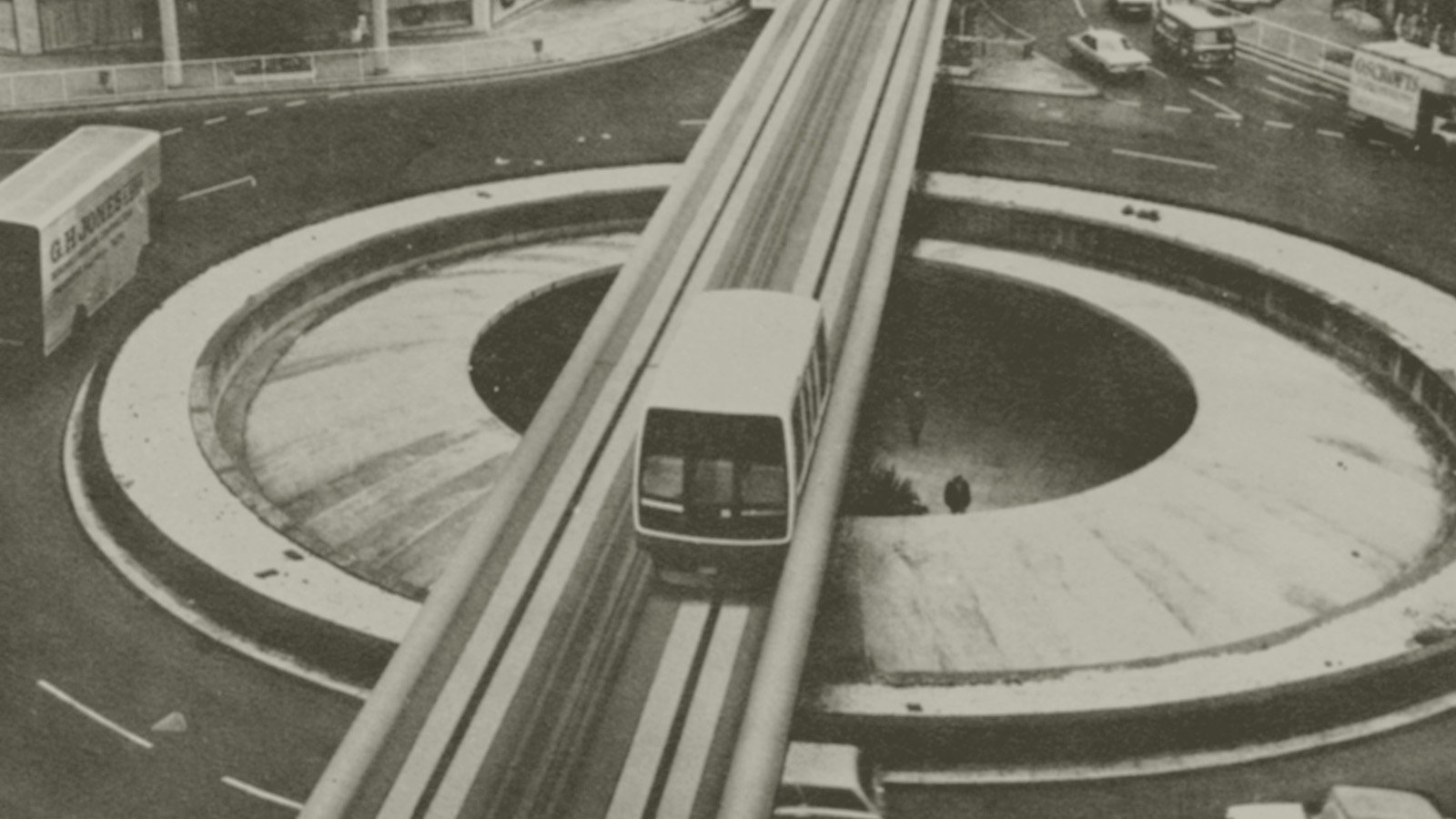 The Sheffield Monorail going over the Hole in the Road - Concept

Back in the 1970s, Sheffield Metropolitan District Council explored methods to better connect various parts of the city centre. The city’s public transportation system had become increasingly strained after the ‘old’ trams stopped running in 1960.

Around the same time, the Government’s Transport and Road Research Laboratory were exploring a project aimed at improving metropolitan transport. Local and national interests conveniently merged.

Initial proposals included an extended minicab system with taxis getting their own ‘stations’ in and around the city. However, a political storm ensued around the intricacies of such a system. Arguments stemmed around locations and designs of the stations leading to planners abandoning the idea in favour of alternative schemes.

A fashion of the time saw a number of airports and expos served by ‘futuristic’ systems such as Monorails. Thinking such a scheme could work in metropolitan areas, the planners conducted a study to introduce similar in Sheffield.

The government simultaneously provided funding to British Rail to research the feasibility of a ‘Maglev’ (magnetic levitation) solution on the same route.

A resulting proposal was publicly exhibited on the third floor of Cole Brothers department store in 1974.

The system presented was Sheffield’s ‘Minitram’ monorail running on 2.5km of track.

Mocked-up photographs showed the tram running along familiar roads and models were displayed to give an idea of how the infrastructure would look. Promotional materials were created.

Automated driverless carriages would be placed on elevated tracks running above existing streets (many of which have had traffic restrictions or been pedestrianised since).

Plans show the Minitram system running from Sheffield Midland Train Station to a terminus where the Moorfoot Building now stands. Essentially, the service would have replaced the incumbent ‘clipper’ bus.

Along the way the system would serve the ‘shopping spine’ of the city centre and popular destinations such as the City Hall, the Town Hall, Sheffield Cathedral and Castle Market.

One of the most iconic images from the exhibition is a mock-up of the Minitram passing over the infamous ‘Hole in the Road’ roundabout.

Estimates showed the Sheffield Monorail would have had a peak capacity of 5,400 passengers per hour if running with three-train cars.

Plans included a possibility of extending the network to Hillsborough, Rotherham and through London Road to Heeley and beyond if the project was successful.

On 22 May 1975 the Minister for Transport officially cancelled the proposals, citing excessive public expenditure and further development needed before such a system could come into public use.

It would take a further twenty years for plans to be revised into a suitable alternative, eventually taking shape in the form of South Yorkshire Supertram.

Beyond the Sheffield Monorail

Sheffield’s Minitram proposals caught the eye of several other boroughs though. Notably, Greater London Council were said to have been jealous that such a scheme should be proposed outside the capital, thus they commissioned a feasibility study to build a similar system in Croydon.

Source: Automated Guideway Transit: An Assessment of PRT and Other New Systems by United States Congress, Office of Technology.

What are your thoughts on the aborted Sheffield Monorail plans? Have your say in the comments below!