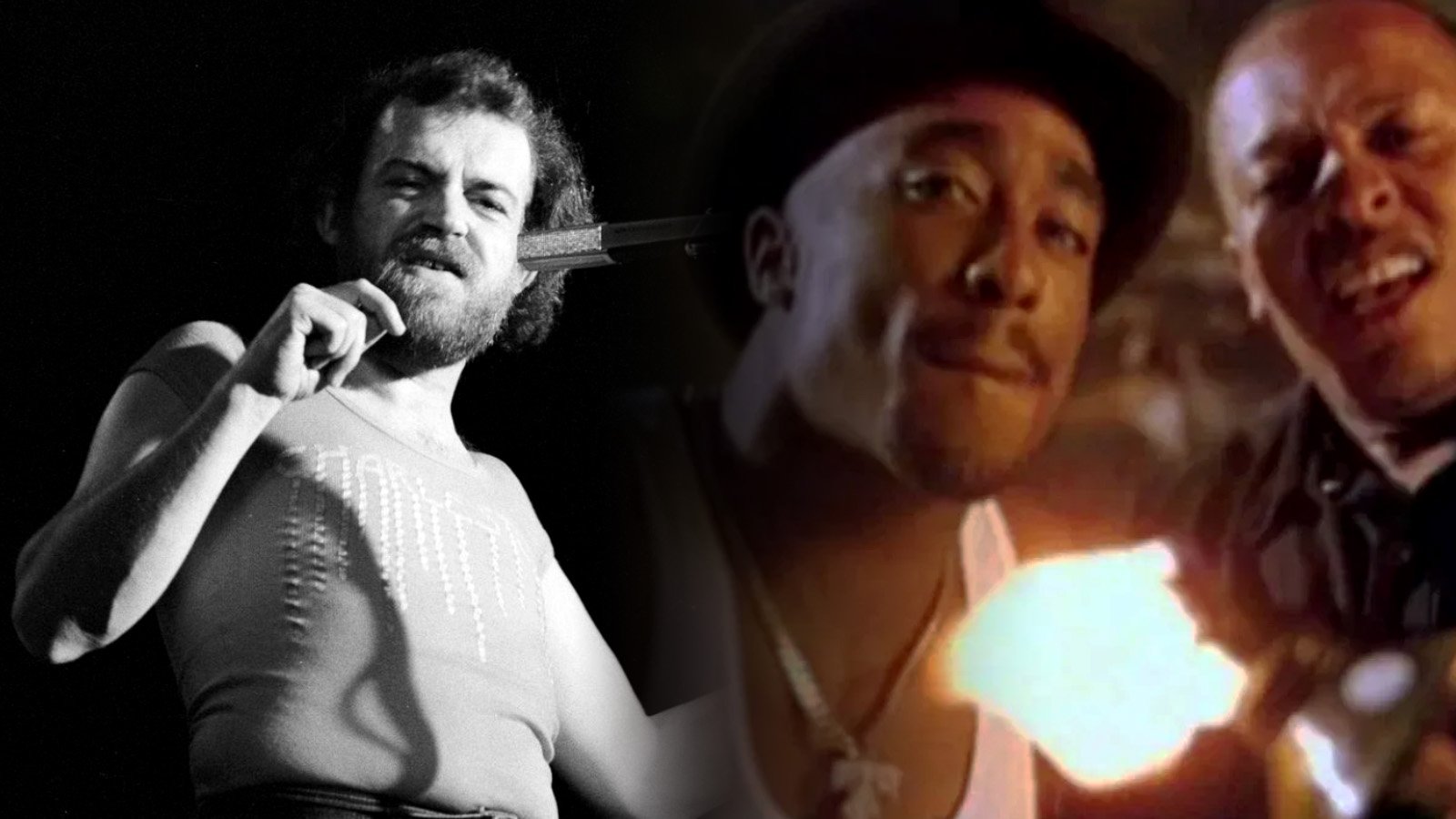 Sheffield’s Joe Cocker lives on with later generations through his music. Did you know he has been sampled by the likes of Tupac Shakur and Dr. Dre? The Sheffield Guide looks back at the life of a Steel City legend.

The sound is unmistakable; the looping piano-and-horns riff, the vocoder-laden chorus and that welcome to the wild, wild West (“a state that’s untouchable like Elliot Ness”).

An international number one single and Grammy award nominee, 2pac and Dr Dre’s ‘California Love’ is embedded into the consciousness of a generation.

The hook of the track – that incredibly catchy riff – had been kicking around hip-hop for some time. It can be heard on tracks by Ultramagnetic MCs (‘Funky’, ‘Blast from the past’) and EPMD (‘Knick knack patty whack’).

It has also been used a number of times since ‘California Love’. Sarah Connor’s pop-soul track ‘He’s Unbelievable’ utilised the riff and Moby sampled the piano on his own hit single ‘Honey’.

Where did the riff come from?

The source of the sample, Joe Cocker’s ‘Woman to Woman’, is a blues triumph.

‘Woman to Woman’ was co-written by Cocker and bandmate Chris Stainton. The song was featured on Joe Cocker’s eponymously-titled 1972 album (released in Europe as ‘Something to say’).

The album reached number 30 in the US but didn’t impact UK or European charts. However, a single release of ‘Woman to Woman’ topped the charts in Spain.

Who is Joe Cocker?

Joe Cocker is probably best known for his popular cover of The Beatles hit ‘With a little help from my friends’. (The 1968 song was later chosen as the theme of nostalgia-laden comedy-drama TV show ‘The Wonder Years’).

“I remember him coming round to the studio in Savile Row and playing me what they’d recorded and it was just mind-blowing, totally turned the song into a soul anthem.”Sir Paul McCartney

Success from that hit propelled Cocker to US stardom with a huge stateside tour. From that, he earned a slot opening the Sunday of the infamous Woodstock festival in New York.

John Robert Cocker (later nicknamed Joe) was born at 38 Tasker Road in Crookes, Sheffield, on 20 May 1944. He grew up listening to inspirations such as Lonnie Donegan and Ray Charles.

In the 1960s Cocker took to performing himself. He adopted the stage name of Vance Arnold and formed a group called The Avengers.

The band toured pubs and clubs of Sheffield, performing mostly cover versions. The Avengers got a break in 1963, being called up to support The Rolling Stones at Sheffield City Hall.

Despite heavy promotion (and a young Jimmy Page on guitar!), his version of The Beatles’ ‘I’ll cry instead’ struggled to sell. Cocker’s short contract with the record label was allowed to lapse as a result.

The singer returned home to Sheffield. He resumed performing around the city with Joe Cocker’s Big Blues Band and later The Grease Band.

With such a distinctive voice it wasn’t long before Cocker again attracted attention. Danny Cordell, producer of Procal Harem and Moody Blues, soon offered another chance at a solo record.

The resulting single, ‘Marjorine’, became a minor hit stateside and opened the door to the lucrative US. The likes of The Who and Gene Pitney invited Cocker to join them on their tours of the States.

However, carrying the burden of a drink and substance abuse problem, Joe became depressed. He again returned home to Sheffield in the early 1970s and took almost two years off his music career.

His friend from The Grease Band, Woodseats-based Chris Stainton, persuaded Cocker back to singing in 1972. The pair, with a new band, headed to Madison Square Garden in New York and performed to 20,000 people.

Cocker and Stainton used the new motivation to pen some material for a new Joe Cocker album. It is on this album that the familiar strains of horns and bluesy piano first meet on ‘Woman to Woman’.

The artist continued recording and touring throughout the seventies. However, the challenges of drug abuse, alcoholism and debt stuck with him.

Infamously, the singer was arrested in Australia for possession of marijuana and assault. Subsequently, authorities gave him 48 hours to leave the country.

Up where we belong

Always keen to refer to his home-town roots, 1982’s ‘Sheffield Steel’ album was a departure for Cocker. A pleasant reggae-inspired affair, the album featured a host of big names including Sly and Robbie, Jimmy Cliff and Robert Palmer.

Singer Jennifer Warnes saw an impressive Cocker performing with The Crusaders at the 1982 Grammy Awards. A long-time fan of Cocker, she decided she wanted them to duet together.

“I was so moved, I was hollering out loud with joy, jumping up and down … After a difficult battle with drugs and alcohol, Joe was in total command once again. I knew at that moment that I would sing with Joe.”Jennifer Warnes

Around this time, Paramount Pictures approached Warnes to perform a song for the upcoming movie ‘An Officer and a Gentleman‘. She immediately suggested her idea of duetting with Joe Cocker.

The pair’s rendition of ‘Up where we belong’ became the lead song on the soundtrack and became an international hit. Selling over two million copies in the US, the song hit number-one on the Billboard Hot 100.

‘Up where we belong’ went on to win the Grammy award for Best Pop Performance by a Duo or Group. Furthermore, it won a Golden Globe, a BAFTA and the Academy Award for Best Original Song.

Following the success of ‘Up where we belong’ Cocker went on to tour around the world. Notably, President George Bush invited the singer to perform at his inauguration.

In its later days Joe Cocker became one of the first rock artists to perform in the old German Democratic Republic. Locals named a field nearby the Rudolf-Harbig-Stadion in Dresden after him (the Cockerwiese, or ‘Cocker Meadow’).

In 2002, Phil Collins and Brian May joined Cocker at the Queen’s golden jubilee ‘Party at the Palace’ to perform ‘With a little help from my friends’. Tours followed in North America, Europe and Australia to promote albums ‘Hymn for my soul’ (2007) and ‘Hard knocks’ (2010).

The Queen awarded Cocker an OBE in the 2007 birthday honours list for his services. to music. He celebrated the honour with concerts at the Royal Albert Hall and Sheffield City Hall.

After that, the legendary artist continued recording and touring into his later years. 2012’s ‘Fire it up’ would be his 40th and last studio album, which he accompanied with a US and European tour.

Singer Billy Joel performed a version of ‘With a little help from my friends’ at a Madison Square Garden concert on 17 September 2014. Joel knowingly stated that Cocker “isn’t very well right now” while introducing the song. The ‘Piano Man’ singer added his endorsement that Cocker should be inducted into the Rock and Roll Hall of Fame.

Three months later, on 22 December 2014, Cocker’s management announced that the singer had sadly passed away. He died aged 70 after a “hard fought battle with small cell lung cancer”.

Tributes poured in from all over the globe, including from Ringo Starr, Steven Tylor, Peter Frampton and more.

“He was without the doubt the greatest rock/soul voice ever to come out of Britain.

“Hugely talented – a true star – but a kind and humble man who loved to perform.”Barrie Marshall, Joe Cocker’s Agent

“He was a lovely northern lad who I loved a lot and, like many people, I loved his singing.

“I knew him through the years as a good mate. I was so sad to hear he had been ill and really sad to hear that he had passed away. He was a great guy, a lovely guy who brought so much to the world and we’ll all miss him.”Sir Paul McCartney

“RIP my good friend, you were one of the best rock singers EVER.”Bryan Adams

“He had a voice that was just unique. He was a very nice guy, as well as being a very talented guy.

“It is very, very sad for all his family and friends and for all who loved him. The great thing with someone like Joe is what they leave behind, and that will be with us for years and years.

“People talk about stage presence, and he really had it.”Rick Wakeman

Joe Cocker’s music continues to be played across the globe, including classics ‘Unchain my heart’, ‘You are so beautiful’ and ‘Feelin’ Alright’.

And – of course – the sample used in numerous songs, including Tupac Shakur and Dr. Dre’s ‘California Love’, originally came from the writings and recordings of the legendary Sheffield singer Joe Cocker and his friend Chris Stainton.

Crookes… knows how to party.