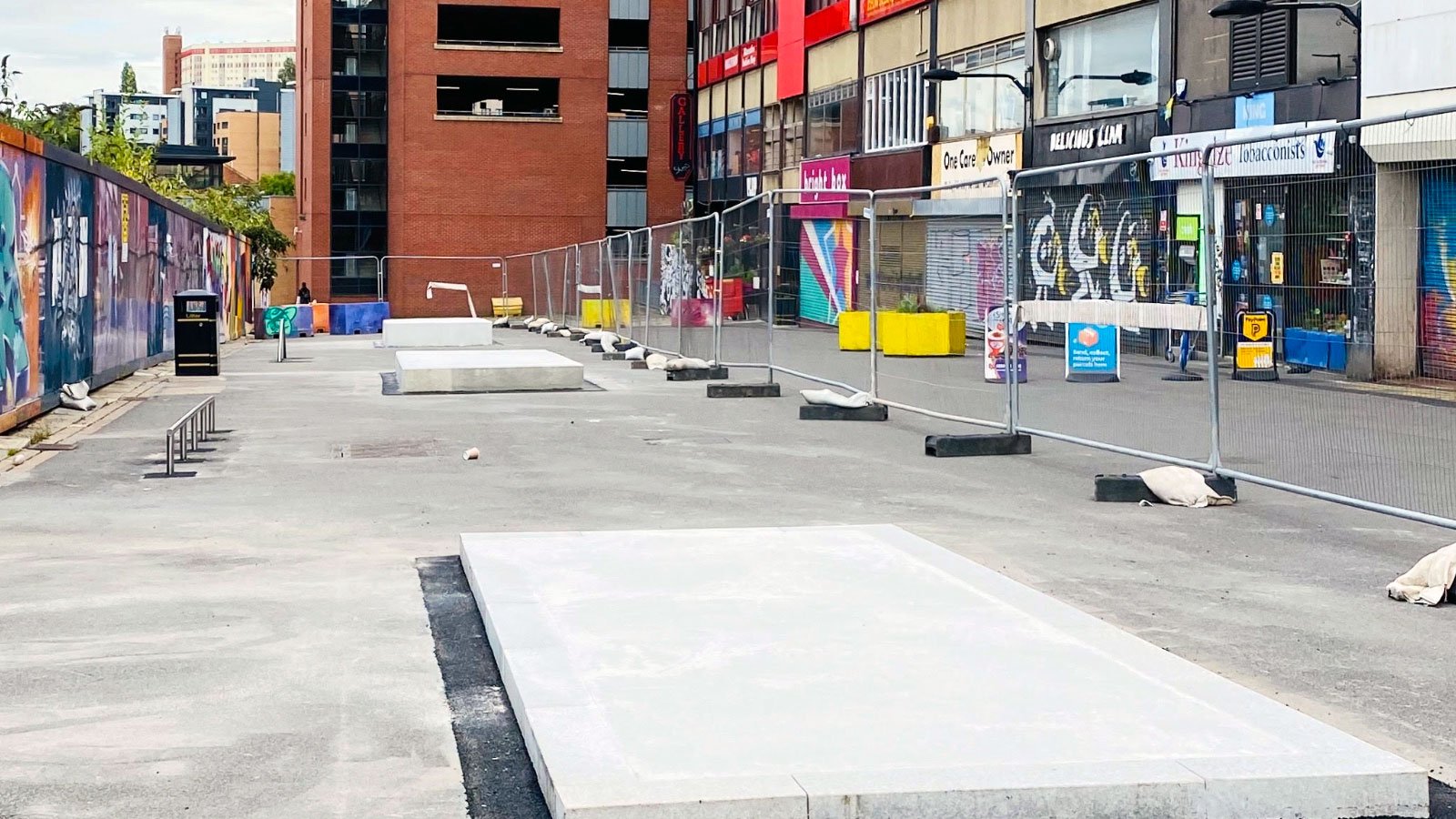 A new skate park has been unveiled on Exchange Street in the Castlegate area of Sheffield.

New street architecture on Exchange Street was unveiled this weekend, providing a new ‘skateable’ area in the city.

The street now features a number of multi-use blocks and rails, designed for use by skateboard, BMX and scooter enthusiasts.

As part of the ongoing regeneration of the wider Castlegate area, the new ‘skate park’ has been created by Skateboard GB and Sheffield City Council.

Officially opening on Saturday 19 September, the skate park section of the street has been named ‘Marioland’.

“It is really exciting to see this project come to fruition, as it has been years in the making. It will provide a great space for Sheffield’s skateboard community and also make this area of the city safe for others to use once again.”Neil Ellis, Skateboard GB

Castlegate Skate Park Built As Part Of The Area’s Regeneration

The build — planned over the last four years — was completed last week.

Building services were provided pro-bono by NCMN, who have been creating the acclaimed Grey To Green scheme on nearby streets.

“This new installation adds to the growing range of attractions on offer in the rejuvenated  Castlegate area, which is already home to a host of new businesses including  Kommune, Kollider and the National Videogames Museum, as well as new workspaces, studios,  apartments and bars.

“That the work has been delivered in partnership with Skateboard GB and local firms is a great example of the support and goodwill that the regeneration of Castlegate is attracting.”Councillor Mazher Iqbal, Cabinet Member for Business and Investment

Skate Park As A Social Hub and Street Sports Destination

It is envisaged the skate park will help to create a street sports destination in the city and establish a new social hub in the area.

Skateboarding has seen a huge rise in participation over recent years and will debut as an Olympic sport at the upcoming Tokyo Summer Games in 2021. Over 1,300 people currently skate in Sheffield out of 750,000 nationally, with those numbers continuing to grow.

Many of the former Exchange Street shops have been converted to different uses under the Re-New Sheffield grant programme, giving the area much needed life since the demolition of Castle Market.

Now the skate park has been integrated into the street, street sports and pedestrians will share the space.

“Providing this space for people to use will not just create a purpose-built space for skateboarders, but will also benefit surrounding businesses and help to make the area a thriving social space.”Councillor Mazher Iqbal, Cabinet Member for Business and Investment

The infrastructure is currently temporary and expected to last two years. If successful similar street architecture may be introduced in other areas of the city.