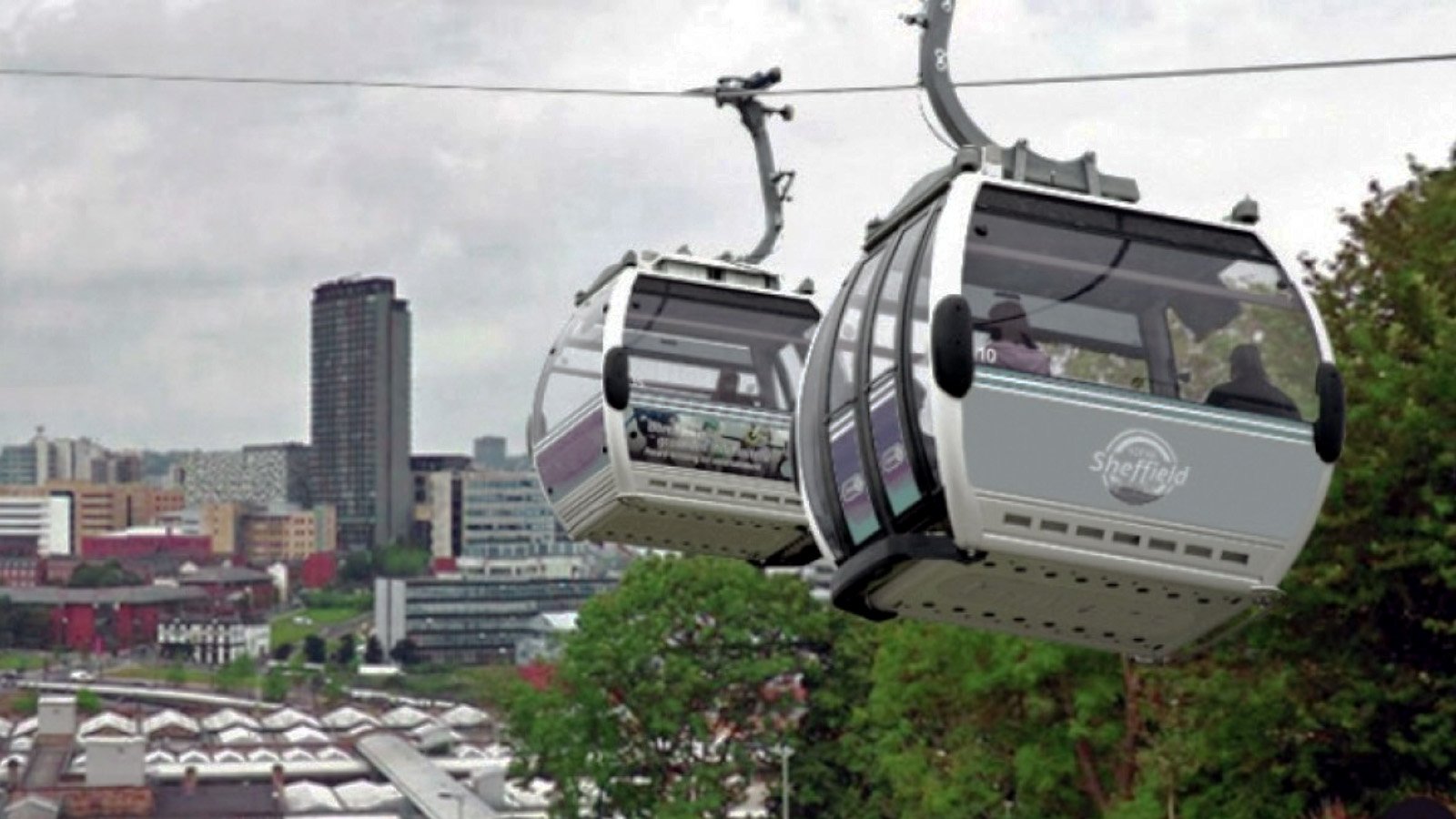 Sheffield Cableway: A Cable Car solution for the Steel City?

Sheffield has been the subject of many crazy transport proposals in the past. Suggestions range from minicab stations to a monorail system — and even a cable car to connect the former ski village to the city centre. We even have new hybrid tram-trains!

Now a city resident’s own proposal has sparked debate after being shared across social networks.

How would a Sheffield Cableway work?

Frankie Roberto originally drafted his solution to Sheffield’s potential transport problems in January 2013. However, they have recently been unearthed by Twitter and Facebook users impressed, and shocked, with his suggestion.

The proposal would see the city’s “Seven hills” connected by a cable car system. Frankie says the idea will help people travelling between various city suburbs.

“Very few buses run on radial routes — they mostly go into and out of the city centre — so that’s not much help,” says Frankie, “The cableway system I propose for Sheffield would travel from hilltop to hilltop around Sheffield in a radial fashion.”

Frankie, a Creative Technologist, says: “A station at the top of each hill would allow passengers to embark or disembark.

“The ultimate plan would be to have a complete loop, but the system could start smaller and expand as it proved itself.”

The cable car system would also connect to the city centre and other transport links. “A stop at Park Hill, by the infamous Grade II* listed flats, would provide a connection to the station and Supertram,” says Frankie.

It’s an interesting proposal, and not without precedent. London operates the Emirates Air Line; a cable car system linking the Docklands with The O2 over the river Thames.

Other cities around the world have been looking at similar solutions to transport problems.

Describing the problem he would like the Sheffield Cableway to solve, Frankie suggests: “Outside of the city’s ring road, the big streets follow the valleys, with smaller roads going up and over each of the hills to connect up the valleys. Walking or cycling these is fun going down, but tough going up.

“If you’re going from one hill to the next, you can often see your destination from the start, but actually getting there means going down into the valley and up the other side — a 20 minute hike.”

Cable cars have been suggested for Sheffield before.

His suggestion would have seen cable cars link a number of locations and landmarks. Routes included stops at Meadowhall, the University of Sheffield and the Royal Hallamshire Hospital. The goal being to reduce congestion, parking and pollution in the city.

Councillor Meade said: “It would cost far less than putting a road down and you could probably cover the whole of the city for the cost of putting in one mile of Supertram.”

“Sheffield would be an ideal place because it’s so hilly.”Councillor Alf Meade

“I’ve received some positive feedback and I’m confident the plans will be accepted,” Councillor Meade added.

The 2003 report was submitted for consideration but nothing came from it. However, a council spokesperson did say that “any plan aimed at improving the transport system would be considered.”

Frankie Roberto’s website also has a number of other interesting articles, including a write up on the differences between Sheffield and Manchester’s tram systems.