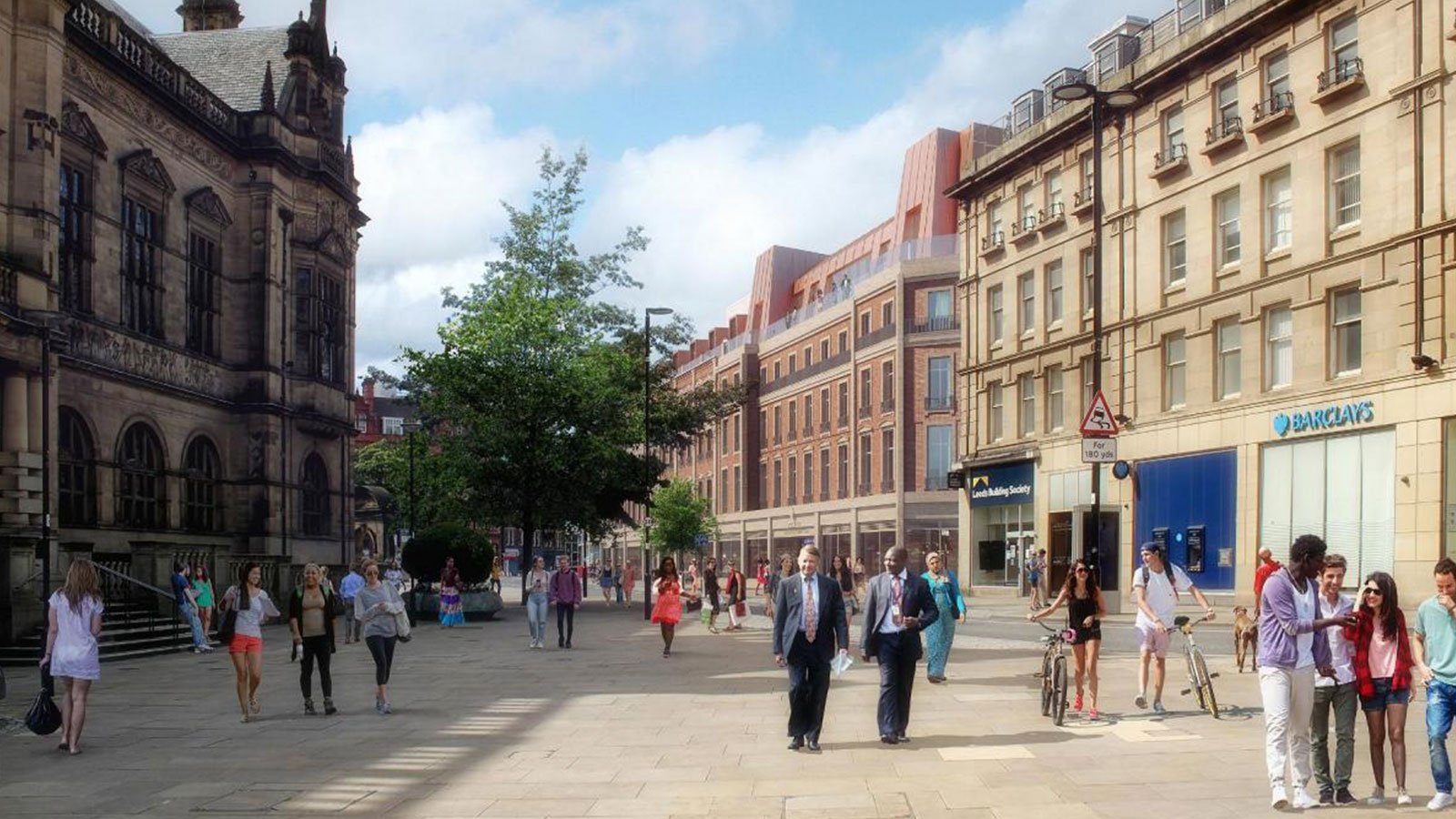 A planning application has today been submitted for a luxury city centre hotel on Pinstone Street.

UPDATE, 18 November: The plans have been formally approved. Full details below the original article.

The submitted plans form a key part of the Heart of the City II city centre regeneration project.

If approved, it will give the green light for a large block on Pinstone Street to be redeveloped. The new hotel will occupy a key location, overlooking the Peace Gardens.

Radisson Blu have been selected to operate a stylish four star+ hotel on the site. Beautiful Victorian façades fronting Pinstone Street will be retained.

“We’re delighted to announce that an application has now been submitted for our plans to add a four star+ hotel and rooftop bar to Sheffield city centre. This step marks yet another significant milestone as we continue our progress towards transforming Sheffield’s heart of the city.”Councillor Mazher Iqbal, Cabinet Member for Business and Investment

Beyond retaining the façades, the upscale hotel will add a sympathetic roof extension and secondary buildings.

The hotel block will offer a “fresh and contemporary design” whilst “paying homage to Sheffield’s unique character”.

154 hotel rooms will be included in the project. Plans also include modern conferencing facilities, a courtyard area and a rooftop bar and terrace.

Ground floor units will be available for retail, food and beverage units.

“After many months of hard work, we’re pleased that an application for the Block A proposals has now been submitted. A huge amount of effort has gone into developing a fresh and contemporary design for the brand-new hotel, while also paying homage to Sheffield’s unique character.

“These plans will breathe fresh life into Pinstone Street, and we can’t wait to welcome international hotel brand Radisson Blu to Sheffield.”

A new dynamic to the city centre’s social scene

As part of the development a new courtyard area will be established, sited between the two hotel buildings.

Designed by local architects HLM, the courtyard is designed as an enticing social space, featuring public seating and atmospheric lighting.

Additionally, a much anticipated rooftop bar and terrace form part of the plans.

The architects promise “to celebrate Sheffield’s built heritage through a modern reinterpretation of the city’s Victorian architecture”.

“We’ve reached this point in the process after a recent public consultation — throughout which we received a great deal of valuable feedback from local people and stakeholder groups.

“The comments and perspectives shared during the consultation have helped us to successfully shape our proposals and I would like to personally thank everyone who has participated in the process.”Councillor Mazher Iqbal, Cabinet Member for Business and Investment

William Mitchell Frieze to be relocated

Whilst the Victorian façades of Palatine Chambers and City Mews will be retained, Barkers Pool house looks set to be replaced.

As part of the development, the new blocks will also renew Burgess Street with a secondary lobby being built.

The William Mitchell Frieze artwork from Barkers Pool House has already been saved. Sheffield City Council have committed to relocating the work within the Heart of the City II development.

Heart of the City II

The Heart of the City II project is now seen as a key to driving Sheffield’s post-coronavirus recovery.

A block has already been completed, replacing the Grosvenor House Hotel, which is now home to HSBC’s offices and several retailers.

Work is already underway on other blocks in the project. The Heart of the City II development covers a key section of the city centre; forming a triangle between Pinstone Street, Division Street and Carver Street.

The following is a release from Sheffield City Council and it’s strategic development partners Queensberry, along with quotes from key people involved:

Submitted by Sheffield City Council and its Strategic Development Partner, Queensberry, in August, the plans are the latest to be approved as part of Sheffield’s transformational Heart of the City scheme.

As an international hotel brand with a reputation for excellence, the arrival of Radisson Blu in Sheffield is expected to attract new business opportunities into the city, while raising its profile as a visitor destination.

Accommodating guests with stylish facilities for both work and relaxation, the hotel will be housed behind the charming facades of Palatine Chambers and City Mews. Replacing Barkers Pool House on Burgess Street will be a second complementary building, containing the majority of the hotel’s 154 bedrooms.

A rooftop bar, restaurant and terrace is also planned for the hotel, which will look out over the Peace Gardens. Upmarket ground-level retail and food and beverage units are also set to enliven this prominent location on Pinstone Street.

A commitment to preserving Sheffield’s Victorian heritage has been integral to the development of the proposals. Designed by Sheffield-based architects, HLM, the retention of Pinstone Street’s historic facades and the incorporation of complementary materials and colours will ensure the new development reflects the city’s strong historic identity.

The plans for Radisson Blu are the latest set of proposals within the Heart of the City scheme to receive planning approval, as the project forges ahead to create a thriving new central hub for Sheffield. Introducing a new mix of leisure, retail, office and residential developments, the scheme is set to breathe new life into the city centre, making it a more attractive place to work and live.

“We’re delighted that our plans to introduce a new hotel to the heart of Sheffield have received planning approval. I’d like to thank everyone who has taken the time to share their comments on these proposals.

“We believe that the arrival of Radisson Blu – a brand of real quality and prestige – not only demonstrates confidence in our city as a worthwhile investment location, but will be a key factor to attracting more businesses and will complement the ongoing rejuvenation of our city centre.”Councillor Mazher Iqbal, Cabinet Member for Business and Investment

“We’re pleased to learn that we have received the go ahead to develop the Radisson Blu hotel in Sheffield city centre. The hotel’s premium brand reputation provides confidence and will no doubt help attract further investment opportunities for Sheffield.

“The hotel’s luxury rooms, first-class conferencing facilities, and bars and restaurants, will deliver a new dynamic to the Heart of the City scheme and wider city centre.”Andrew Davison, Project Director at Queensberry, Strategic Development Partner

“We’re very excited to be at the forefront of Sheffield’s regeneration project in a fantastic location at the heart of the city, as well as adding this vibrant new property to our selection of Radisson Blu hotels across the UK.”Adela Cristea, Senior Director, Head of Business Development UK & Ireland, Radisson Hotel Group