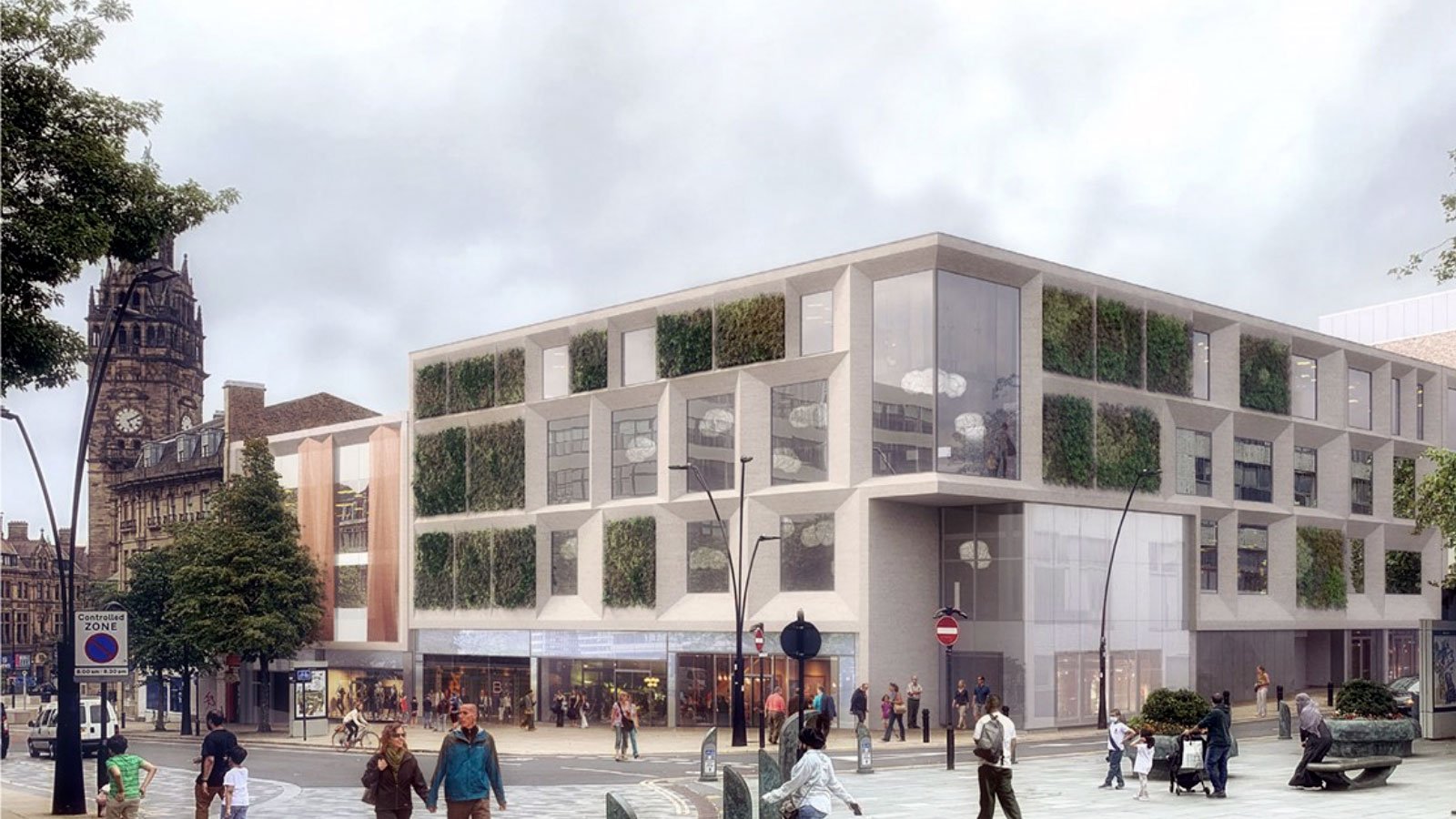 Sheffield City Council have today submitted plans for the large block on the corner of Barkers Pool and Burgess Street in the City Centre.

Named for the fondly remembered Gaumont Theatre that once occupied the site, the ‘Gaumont’ Building has recently been occupied by the likes of Area nightclub, Patisserie Valerie and Stone the Crows, among others.

Now the building is to get a ‘facelift’ as part of the ongoing Heart of the City II project.

Most of the building’s internal features will be retained. However, a new exterior is proposed to replace the current red-frame-and-glass styling, which has been in place since 1985.

The new exterior has been designed by Sheffield-based HLM Architects to reflect the site’s original use as a theatre.

Originally opened in 1927 as the Regent Theatre, the building was renamed to Gaumont Theatre in 1946. The large theatre played host to a number of high-profile gigs, including a famous performance by The Beatles in December 1965.

Sadly, the impressive original building was demolished and replaced by the current structure, originally housing a large Odeon Cinema, in 1985.

However, HLM have designed the new exterior to reflect an inspiration of the original Regent and Gaumont Theatres.

“The final concept for the façade is a playful reinterpretation of features of the Regent Cinema.

“The new façade provides an elegant and refined addition to Barker’s Pool which respects the civic location of the site. To the corner of Barker’s Pool and Burgess Street a double height entrance has been formed, creating a generous public entrance to the building, and internal alterations improve accessibility throughout the building.”Delia Harmston, HLM Architect’s Studio Lead

The final use of the main internal structure of the building has not yet been confirmed. The submitted plans keep the internals largely untouched to “allow for maximum flexibility moving forward”.

However, it is expected the ground floor will continue to house a number of retail units along Barkers Pool.

Additionally, the plans include the potential to add ‘Living Walls’, which allow for greenery to be built onto the structure. Such features will help Sheffield City Council move forward on environmental and sustainability targets.

Other successful ‘Living Walls’ in the city include Site Gallery on Brown Street.

“The Gaumont is in an important position within the city centre. With a new Radisson Blu planned next door and with the great work taking place on Pinstone Street, I don’t think many people in the city would disagree that the existing look of the Gaumont is outdated and tired, and in need of a revamp.”Councillor Mazher Iqbal, Cabinet Member for Business and Investment

The Gaumont Building as Part of Heart of the City II

Other aspects of the Heart of the City II development include the recently completed Grosvenor House which is home to HSBC’s offices in Sheffield as well as popular new retail outlets Weekday, Monki and Marmadukes.

Development continues along Pinstone Street, with new structures currently being built behind the traditional street façades.

“Across the Heart of the City scheme, we have tried to showcase heritage wherever possible, so I am delighted to see the architect using the Regent Theatre as their inspiration for the new design, while still creating something modern, fresh and exciting.”Councillor Mazher Iqbal, Cabinet Member for Business and Investment