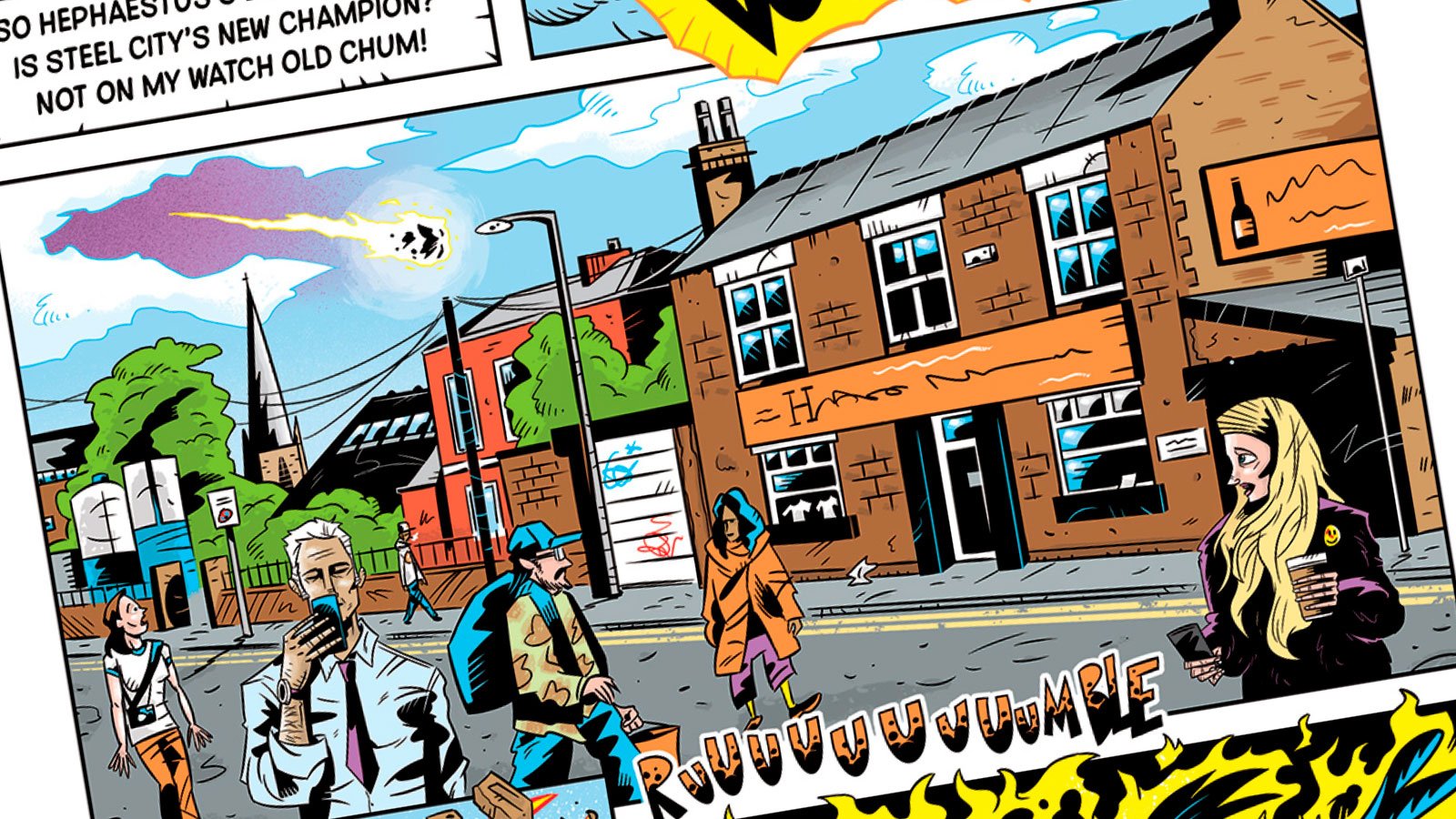 A new Sheffield-themed comic book is in the works from steel-city born artist Jim Connolly — here’s a quick look and how you can get your copy whilst helping with the creation of ‘Made of Steel’.

‘Made of Steel’ — a Sheffield-themed comic book from artist Jim Connolly.

Sheffield born artist Jim Connolly is realising his dream of creating an original comic book based on his home town.

The comic, titled ‘Made of Steel’, features a number of characters and locations based in and around Sheffield.

“I was sat on a bus with my mum circa ’82 and was shocked to discover that Spiderman, the Hulk, Batman etc were not based in Sheffield. I was deeply gutted and think in retrospect that much of my adult career has been shaped by trying to put that moment right.”Jim Connolly, Made of Steel Artist

Recognisable locations include a factory that resembles the original Henderson’s Relish location on Leavy Greave Road, a familiar Kelham Island pub renamed ‘The Rotund Feline’ and a representation of Tinsley Towers.

Meanwhile, characters depicted are based on Sheffield icons such as Vulcan (representing the statue atop Sheffield’s Town Hall) and a pair of antagonists somewhat based on city football mascots.

The main protagonist is a hero called Steel Bolt, described as “punky/indie teenage college student from ‘Steel City’, an alt-universe version of Sheffield”.

“She’s too cool to stick on some stupid leotard/bikini and instead goes for a roller derby meets knight look with signature Britpop tat. She’s young but has a sharp wit and is totally fearless. She’s new to the hero caper but lives to look out for her city.”Jim Connolly, Made of Steel Artist

How to help Jim Connolly publish Made of Steel

As a self-publisher, Jim Connolly doesn’t have the huge backing of a media empire to help with distribution of the comic book.

Instead, Jim is looking for fans, customers and readers to back the project through popular crowdfunding platform Kickstarter.

You can back the project at various tiers, which include a digital copy of the comic for £3, a hard copy for £5 and versions that also come with various art prints and bonuses at higher amounts.

“I have 31 days to raise enough funds to cover my overhead during the remaining work and also self-publish and distribute the comic-books.

“There will be many different tiers from a low cost digital version of the book right up to being able to actually appear in it to score the winning goal in the Steel City Derby that is going on in the background of the main battle. I will also have tiers to pledge for the original artwork pages, art prints of the alt-universe teams logos and other cool rewards.

“If I fail to reach my target I get nothing so literally everything counts and any help to complete my quest is massively appreciated!

“Please help me put things right for that kid on the bus in ’82.”Jim Connolly, Made of Steel Artist

About Jim Connolly, Made of Steel Artist

Jim Connolly is a Sheffield-born artist who now resides in Greater Manchester.

Connolly’s work is familiar across the city, having been used on branding and goods from Sheffield’s longest-running existing brewery, Kelham Island Brewery.

Further afield, Jim produced art images of Eddie from Iron Maiden for a game that promoted one of the band’s albums. Jarvis Cocker, Richard Hawley and Badly Drawn Boy have all expressed appreciation for his art.

“I work in a comic-book style that varies from a more serious graphic novel look to the cartoonier side of things. I like to use black & white heavily and a simple but brash palette that gives a retro feel to things.”Jim Connolly, Made of Steel Artist

Outside of his art, Jim can be found co-fronting punk-rock outfit ‘Friends of Batman’.

Back Jim Connolly’s ‘Made of Steel’ comic book now at Kickstarter. The crowdfunding campaign lasts throughout October.