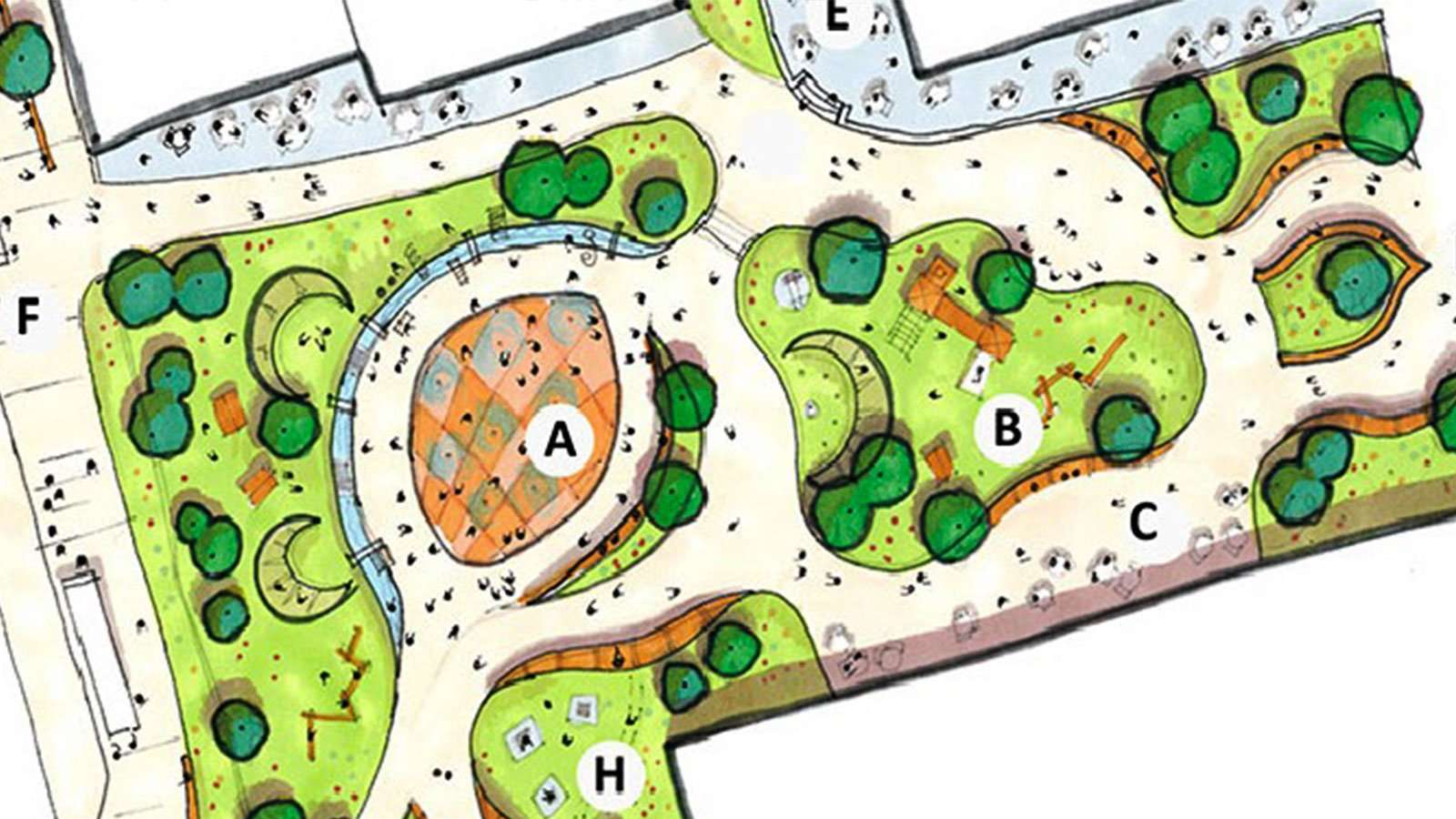 Sheffield City Council have today revealed plans for Pound’s Park — a new park in the Heart of the City.

Pound’s Park for Sheffield’s Heart of the City

Plans have been revealed for a new Sheffield City Centre park as part of the ongoing Heart of the City II regeneration project.

Pound’s Park is proposed in the area of the former fire station between Carver Street, Rockingham Street and Wellington Street.

“We are very excited and proud to unveil these latest plans for Heart of the City.

“The scheme is transforming Sheffield city centre, creating new places to live, work, shop and socialise. Alongside the new and repurposed buildings, we understand the importance of introducing more attractive outdoor spaces for everyone to enjoy.

“Pound’s Park will be a beautifully designed public space of real quality – one of the most significant city centre parks in the country. It will provide a new focal point for families, prioritise waking and cycling over cars, and help improve both the physical and mental wellbeing of city centre visitors, workers and residents.”Councillor Mazher Iqbal, Cabinet Member for Business and Investment

Among the plans for the new Pound’s Park in Sheffield City Centre are a number of interactive and imaginative features.

A large ‘Interactive Water Play’ area will be a focal point, whilst a ‘Physical Imaginative Play’ area will entertain children. Similarly, a Toddlers Play and Inclusive Play area is included.

Green spaces and trees make the area a welcoming connection with nature in this urban environment.

Modern lighting and facilities will help create a space that is safe and usable well into the evenings.

“In Sheffield we have developed a truly distinctive and high-quality public realm in the city centre, through our Grey to Green scheme and in areas such as Charter Square.

“Pound’s Park will see a continuation of this quality, helping us to create a strong sense of character and connection across the whole city centre. Trees and planting will remain a key feature, being used extensively to provide colour and seasonal interest, increase biodiversity, and provide sustainable management of rainwater.

“Our plans are ambitious and will reinvent the expectations of a city park, with a special focus on incorporating a multitude of experiences for playing, relaxation and socialising.”Councillor Julie Grocutt, Cabinet Member for Transport and Development

The Council will be inviting tenders later this year for blocks located on the north and south boundaries of the park, with hopes for offices, retail and cafe/bars complete with terraces that interface with the new public space.

Likewise, a new bus interchange will connect the park and wider area with the City Centre phase of the Connecting Sheffield scheme, which offers improved public transport links and encourages active travel in the city.

Planners state that “a straight walk of around 200 paces will take people from the bus stops to the back of John Lewis”.

Pound’s Park will also become a new home for the William Mitchell frieze.

The concrete artwork was removed from Barkers Pool House on Burgess Street last year in preparation for the new Radisson Blu hotel being developed there.

Sheffield City Council had promised to find a permanent new location for the frieze. With a placement in Pound’s Park, the artwork will have a much more prominent location, enabling it to be enjoyed by more people.

The naming of Pound’s Park being made for Sheffield’s first Chief Fire Officer, Superintendent John Charles Pound, has been welcomed by the city’s fire service.

“I know that our old headquarters on Wellington Street were a much loved place of work for many current and former members of staff and it feels fitting for this proposed green space to retain some connection with its past by being named in this way. The fire and rescue service is also rightly proud of its long and illustrious heritage and we would feel honoured for the park to be named after the city’s first Chief Fire Officer.”Alex Johnson, Chief Fire Officer at South Yorkshire Fire and Rescue

Plans for Pound’s Park replace former proposals for a multi-storey car park, hotel and 150,000 sq ft of office blocks on the space.

Funding will partly come from the Transforming Cities Fund from the Department of Transport, recently awarded to Sheffield City Council following a successful bidding process, and the Getting Building Fund.

A public consultation on the new park is planned and local residents will be invited to view the proposals in more detail soon.